Loki is known as the god of chaos and lie in norse mythology.
In the story’s about Loki, you can find him as a trickster, one who chooses sides that benefit him and the one who always gets into trouble.
You can read more about Loki here.
https://en.wikipedia.org/wiki/Loki

Why is Loki the one of chaos and lie?

The fan-theory story that is going around is very different than movies want to believe us.
Let’s look at it for a moment.

Loki is a person who likes the cold and most likely has a low body temperature in what is normal for him because he is a frost giant.
(Do know that the body’s in Asgard where/are different than here on earth.)
Loki started out as a emotionally unstable person and was nuts, but was not a murderer.

It is told that Loki have fallen of the Bifrost.
(The Bifrost is the rainbow bridge between Asgard and Midgard.)
Thanos (who is the personification of death in Greek Mythology.)
https://en.wikipedia.org/wiki/Thanatos

When Loki have fallen down, Thanos “helpt” Loki in the wrong way.

Do I need to remind you what he looked like during this entire scene in the movie Thor? Thanos has telepathic ability to read minds but took advantage of the situation.
Whit his telepathic powers, he broke in the mind of Loki to find his fears, weaknesses and darkest secrets.
And abused the crap out of Loki and to control Loki in any given time to take over his mind and body.

Who do you torture a frost giant? White heat.
Heat Exhaustion Symptoms

Thanos and the Chitauri took the Loki we saw in the movie Thor and tortured and corrupted him until he was warped into their own personal demigod, ready to do their bidding.
Why do you think Loki spouts off all these quotes about how “Freedom is life’s great lie,” and “In the end, you will always kneel”? He’s projecting.
(We can see this back in MK ultra in how a mind is broken down fore there own bidding.)

So, when he trips? That’s the aftershocks of torture.
That’s a Loki, weakened and struggling to stay upright, pushing forward through the pain because, otherwise?

“You will long for something as sweet as pain.”

He has to keep going because the alternative isn’t a question.
Source: https://moviepilot.com/posts/2928583

So here we have a Loki who was emotionally unstable and nuts, but not a complete wrong man.
But after the torture he had to endure, he was a changed man and a slave of Thanos.
In where Loki gets into a lot of troubles just because he is listening to Thanos (as his mind-slave) and wants to help the other gods.

He is in an inner fight with himself and aimd on survival just to stay alive.
Can you imagine how you fight yourself, when you know that you are taken over again?
And need to fight to not to lose your mind?

Later he finds out that Odin took him in as a sun after a battle with the giants.
Loki is the biological sun  Fárbauti and Laufey. and was not killed in the battle.
Because a baby is never to blame of a war, Odin look Loki in as his own sun and raised him up together with Thor who is his biological sun.
Farbauti is the king of the Frost Giants and the Frost Giants are the old enemies of the Asgards.

Odin was hoping when he took Loki in, that this could be the way to stop the war between the Frost Giants and the Asgards.
Loki got mad at Odin later in life, because he never was told who he really was.

So whit the torture of Thanos and his own hidden history, Loki became the archetype of the wounded child.
So you wonder how a person can become a murderer?
God or no god, human or no human, animal or no animal because when it comes to survical we all have the ability to go beyond our own boundaries.
And we can push ourselves in so many ways you can not even believe.

In this situation, we find a Loki who is not a complete morally wrong man, but because of the abuse he turned out into a wrong man.
So can you blame him? Or is it better to not look at Loki, but to his life-story?

This situation, the abuse, the torture, the misinformation is a global epidemic in creation.
Loki is just one example of so many spirits who have gone nuts.
In another video i was talking about the torture chamber of creation in where abuse took place in the most wrong ways you can not even imagen.
So abuse was always there in and out of body in where a spirit was freaking out in and out of body.
Can you imagine to be so tortured that you can not find some peace in your own mind to keep you into a constant state of pure chaos?

Remember, the more you got abused, the bigger you will grow, but at what costs?
Cancer in your own soul? That we see as heavy abuse frequencies.

Whit this there can be a strong Pavlof response in and out of body in where you only need a suggestion to bring back old past life pain.

During the summer of 2017, i have written an article in where a sun (big yellow thing in the air) in the universe was abusing the planets around him.
(Suns are male and planets are female.)
The planets around him were crying because he was sending out so much radiation, he was hurting the planets around him.
After a cleanup in where the abusefrequensies were removed and he got a big healing, the sun finely understood what he was doing and turns back to a normal sun.
But Arae really needed to tell this sun the truth and showed him what he was doing.
(We translate this to take the vail away.)
http://www.balancedawakening.nl/2017/08/13/sun-feels-guilty-becouse-of-abuse-a-new-cleaning-wave-is-going-true-creation-13-august-2017/

This is only one example, the whole of creation is going threw this.

The other side is in gaos right new in where a lot is happening.
The main focal point of Lilly is done with the situation and is taking the strings back into her own hands as new source mother…or as the big sister.

All of this is happening to speed up the current process.

The situation of Loki, is new in progress in where more and more souls are becoming aware of what they did in there past.
They learn to understand it, learn from it and to move forwards.

Loki is the god of Chaos, and chaos we have…here on the planet and all over the place.

Chaos energy at the moment is everywhere.
But it is new time that we can see and start to find out what we have done.
To face it, know it, make it your own and to know that it was not your fault.
It is done to us via old source to control everybody.
No matter how hard you have fought this…it was beyond youre control.

This wave of energy is active in creation.
Everybody and everything in creation starts to see what is going on and what they have done.
Altho some are going absolute NUTS and need extra help.
There are some spirits who can not handle it.
These troubled souls are taken right away into stases (a deep sleep) where they get all the love the need and more to heal.
Later they will be set free again.
It doesn’t matter when you as a spirit become sad or depressed, as long that you don’t hurt others.
But when you swing out from total frustration, it is a one way ticket to a healing sfeer to recover from the gaos and stress.
Direct intervention with love, so that this troubled spirit can become itself again.
(I do talk about spirits who are out of body and are not having a life at the moment, spirits who have a life wil get other strong help, but nobody is left alone.) 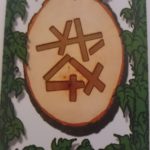 This Loki energy is something that we can see in other movies and series.
A few examples are the Joker from the movie Batman and The Mad Hatter from the movie Alice in Wonderland.
You can find the chaos back in the deck of J’arae as the Chaos card.

Altho the life of Loki did not end well, this story we are new in will turn out for the better.
When you have understood what happend and you can see the real picture, you will understand yourself better.